The elemental insanity of carbon sequestration 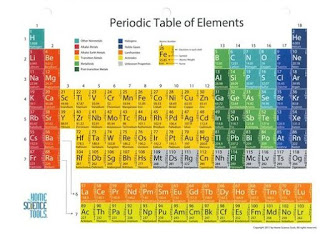 The periodic table of the elements, devised by Mendeleev in 1870, is one of the most dangerous things ever created. It seemingly awakens us to a world of chemical possibilities, but it misleads us into believing that the world actually provides us with these things as starting materials. The most obvious problem, of course, is that is gives equal visual weight to atoms with vastly different relative abundances. Thus, we could try scaling by that. But that seems hard to get right as well.

But my current beef is that, except for a few inert and/or shiny things, nothing is available in elemental form. Which leads into an analysis of this fake news:
Scientists find way to make mineral which can remove CO2 from atmosphere 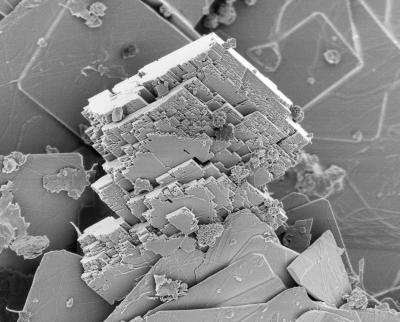 ******snip***
Scientists have found a rapid way of producing magnesite, a mineral which stores carbon dioxide. If this can be developed to an industrial scale, it opens the door to removing CO2 from the atmosphere for long-term storage, thus countering the global warming effect of atmospheric CO2.
...
The researchers were able to show that by using polystyrene microspheres as a catalyst, magnesite would form within 72 days. The microspheres themselves are unchanged by the production process, so they can ideally be reused.
"For now, we recognise that this is an experimental process, and will need to be scaled up before we can be sure that magnesite can be used in carbon sequestration (taking CO2 from the atmosphere and permanently storing it as magnesite). This depends on several variables, including the price of carbon and the refinement of the sequestration technology, but we now know that the science makes it do-able".
Commenting, Professor Peter Kelemen at Columbia University's Lamont Doherty Earth Observatory (New York) said "It is really exciting that this group has worked out the mechanism of natural magnesite crystallization at low temperatures, as has been previously observed—but not explained—in weathering of ultramafic rocks. The potential for accelerating the process is also important, potentially offering a benign and relatively inexpensive route to carbon storage, and perhaps even direct CO2 removal from air."
******end snip***

Exciting times we live in.
Of course, we need some magnesium. Magnesite is MgCO3. Well, I guess that is where the CO2 goes. Magnesium seems rather abundant, so where can we get a bunch?  Wait for it...
Magnesite. 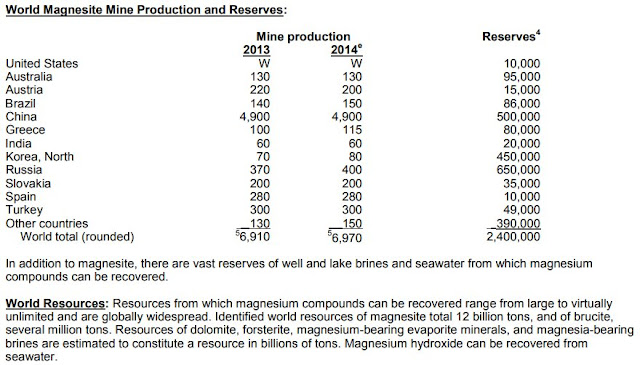 .
(amounts in thousands of tonnes)
Since mining magnesite and heating off the CO2 so that we can sequester CO2 might not be productive (and this will be the case for other mineral sources), how about seawater?
Let's find out how much magnesium we need. Right now, the world emits about 36 billion tonnes of carbon dioxide annually . Since we need one Mg for every CO2 ,we only need 6/11 times as much Mg (molecular weight ratio) by mass. But magnesium is only present in seawater at 1.29% by mass, so factor that in and convert to volume. And the answer is:
1524 cubic kilometers, a bit less than the volume of Lake Ontario.
Great.

Oleksander Artem said…
I'M NOW FULFILL FINANCIALLY BECAUSE OF THE LOAN I GOT FROM LFDS .I would like to bring this to the notice of the public about how i came in contact with LFDS after i lost my job and being denied loan by my bank and other financial institution due to my credit score. I could not pay my children's fees. I was behind on bills, about to be thrown out of the house due to my inability to pay my rent, It was during this period my kids were taken from me by foster care. Then i set out to seek for funds online where i lost $3,670 that i borrowed from friends which i was rip off by two online loan companies. Until i read about:Le_Meridian Funding Service  (lfdsloans@outlook.com / lfdsloans@lemeridianfds.com) somewhere on the internet, Still wasn't convince because of what i have been through until a relative of mine who is a clergy also told me about the ongoing loan scheme of LFDS at a very low interest rate of 1.9%% and lovely repayment terms without penalty for default of payment. I have no choice than to also contact them which i did through text +1-989-394-3740 and Mr Benjamin responded back to me That day was the I'M best and greatest day of my life which can never be forgotten when i receive a credit alert of $400,000.00 Usd loan amount i applied for. I utilized the loan effectively to pay up my debts and to start up a business and today i and my kids are so happy and fulfill. You can as well contact them through email: (lfdsloans@outlook.com / lfdsloans@lemeridianfds.com)  WhatsApptext  helpline: +1-989-394-3740 Why am i doing this? I am doing this to save as many that are in need of a loan not to be victim of scams on the internet. Thanks and God bless you all, I'm Oleksander Artem from Horizon Park BC , Ukrain.
April 30, 2020 at 7:43 PM

Popular posts from this blog

September 30, 2013
So why does an oil industry major sell working gas wells? Shell Plans to Sell Stake in Eagle Ford Shale - WSJ The explanation tossed out is that Shell and other majors came late into the game, overpaying for assets. Okay. This would explain a decision to sell acreage. But selling working wells indicates that the money flowing from these wells is not good enough to make owing them worthwhile for Shell. (Indeed, the original WSJ report reported "the assets weren’t meeting the company’s profit targets") Can the smaller buyer (with less overhead, perhaps) can deal with a lower margin? We'll see. A month ago, after reports of write downs of shale assets by many companies, it was suggested that The companies are turning instead to developing current projects, unable to justify buying more property while fields bought during the 2009-2012 flurry remain below their purchase price, according to analysts. As Fadel Gheit, an analyst at Oppenheimer & Co. Inc. was quot
4 comments
Read more

Who Killed The Electric Gas Tank?

July 14, 2009
A few months from now, or perhaps 5-10 years from now, we will know whether or not EEStor can make good on its promise to sell a electrical storage device capable of propelling a reasonably-sized automobile down a freeway for a couple hundred miles before needing a recharge. There are some indications that they are making progress and that this could happen, but there are many reasons to remain skeptical. In this post, I will wade into these waters -- and then get out quickly. Will EEStor revolutionize motor transportation and more? Will it even work? The human quest for energy is an interesting topic. Mostly by burning things, we have transformed our relationship with the planet and each other. It has been said that we are addicted to oil, but it is more the case that we are addicted to what harnessed energy can do. As it is learned that some utilization of energy is not sustainable for environmental reasons, or for lack of supply, the natural response is to search for other ways of
Post a Comment
Read more